From a paid advertisement in The Daily Oklahoman:

Full text below the fold, should you find it difficult to read this ad on your browser.

END_OF_DOCUMENT_TOKEN_TO_BE_REPLACED

Not perfect — there is a brown spot on it; but beautiful, surpassingly rare, a creature of the serendipity of nature, it is a natural dogwood blossom in Dallas County, Texas: 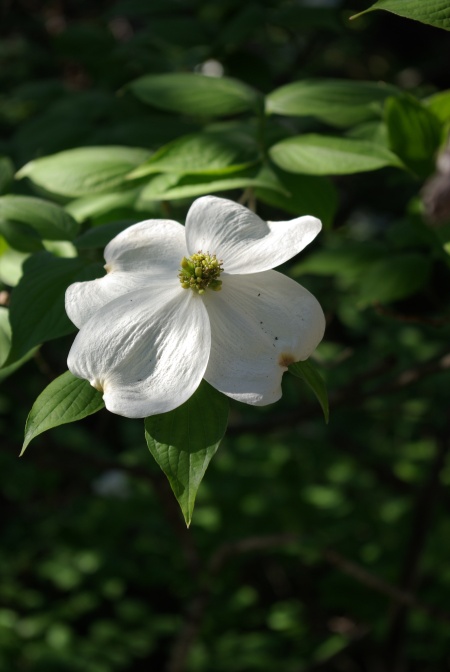 What we came to see – the magical dogwood blossoms.

On April 5 Kathryn and I joined David Hurt and a jovial band of hikers for a trip into Dogwood Canyon in Cedar Hill, Texas. The physical formation of Cedar Hill upon which the city of the same name and several others stand, is one of the highest spots between the Mississippi River and the Rocky Mountains. It is an outcropping of chalk, a formation known as the Austin Chalk, that runs from Austin, north nearly to the Oklahoma border.

This rock formation creates a clear physical marker of the boundary between East and West. Dallas is east of the line, Fort Worth, Gateway to the Old West, is 30 miles farther west. On this outcropping is married the plains of the west with the oaks and forests of the east. Within a few miles of the line, the botanical landscape changes, cowboy prairie lands one way, forest lands the other.

Dogwoods love the forests of East Texas with their acidic soils. Early spring produces fireworks-like bursts of white dogwood blossoms in the understory of East Texas forests. Dogwoods die out well east of Dallas as the soil changes acidity; driving from Dallas one can count on 30 to 60 miles before finding a dogwood.

Except in Dogwood Canyon. There, where entrepreneur David Hurt originally planned to build a family hideout and getaway, he found a stand of dogwoods defying botanists and the Department of Agriculture’s plant zone maps, blooming furiously in thin alkaline soil atop the Austin Chalk.

(continued below the fold)

END_OF_DOCUMENT_TOKEN_TO_BE_REPLACED

Odds are high that readers of any blog are too young to remember. Heck, I’d forgotten about it until Matthew Tabor reminded me.

Get the story from Tabor’s blog. He offers credits to HotAir.com.

Major League Baseball was kind enough to preserve the story, which you may watch below.