Monckton will lie about anything

Lordy! Monckton said to the Winnipeg Sun (in Manitoba, but you knew that) :

He continues: “Remember DDT, the pesticide used to kill mosquitoes that carried malaria. Jackie Kennedy read a book saying it was harmful, got her husband the president to bring pressure to have it banned and in 40 years 40 million people, mainly children, died. Now we’ve come to our senses and re-introduced it but only after the fashionable left did their damage.

Not so fast.  Here are a few of the errors.

1.  Key phrase:  “the pesticide that used to kill mosquitoes that carried malaria.”  It’s not very good anymore.  Mosquitoes acquired alleles that allow them to digest DDT, rather as food, instead of getting poisoned by it.  This evolutionary response was speeded when DDT was overused (abused, that is) by big farmers.  The World Health Organization had a campaign to use DDT to knock down a mosquito population for about six months, quickly treat all the humans who had the disease, and so when the mosquitoes came roaring back after six months, there would be no malaria for them to get from one person to spread.  WHO stopped the program when the quickly-evolving resistance to DDT made it impossible.  This was in the years 1964 through about 1966.  DDT was not banned, and production and use of the stuff continued around the world.

2.  President Kennedy was asked about DDT at a press conference.  He said he’d read the book.  It wasn’t “meddling” by Jackie Kennedy — though she would have been right had she done it.   Jackie Kennedy proved her mettle later as an editor of books, a real force to be reckoned with and a woman of great judgment.

(Yeah, I had sound trouble with it, except for the press conference with Kennedy.)

President John F. Kennedy at a press conference on August 29, 1962; he announced the retirement of Supreme Court Associate Justice Felix Frankfurter and the appointment of Arthur Goldberg to replace him; in questions, he was asked about DDT and Rachel Carson’s book, Silent Spring.

4.  Kennedy did ask the experts to check out Carson’s book.  The President’s Science Advisory Commitee (PSAC) (including Nobel winners) spent several months studying the book and its footnotes, and checking with other experts.  In May 1963 they issued a verdict:  Carson’s book, Silent Spring, was accurate and true, but suffered one flaw:  Carson’s alarm wasn’t loud enough nor demanding action quickly enough.  PSAC urged Kennedy to act immediately to slow or stop the use of DDT.  Alas, he was assassinated six months later. (Full text of the PSAC report is available on this blog, here.)

5.  Though the federal government stopped massive use of DDT on its side, large agricultural interests used it extensively.  After a decade of devastation across the country, in two separate trials federal judges ruled DDT a dangerous substance — they withheld injunctions when the newly-formed EPA promised to expedite hearings on tighter regulations for the stuff which had been floundering for a few years.  So it was that in 1971, more than seven years after John F. Kennedy’s death, a full administrative hearing on DDT began at EPA.  DDT had been fully available world wide for 9 years after Carson’s book.

6.  In 1972, still under court order, the EPA administrative law judge Edmund Sweeney ruled that a new label for DDT would be adequate control.  Under the new label, use would be severely restricted, and broadcast spraying on crops would be prohibited, but DDT would be freely available.  If someone wanted to, they could buy DDT and broadcast it themselves.  Under the labeling rules, nothing could be done to such violators.  Judge Sweeney carefully documented in his hearings all the benefits and drawbacks of DDT.  A more restrictive proposal, such as a ban, would not do much more than the new label (if the label was followed), and Sweeney said that he did not find that EPA had the power to do any more.  EPA administrator William Ruckleshaus got a more detailed review of the law from his legal team, and concluded that EPA could indeed ban broadcast use, and so he did.  At least two of the DDT manufacturers sued, claiming there was no scientific basis for a ban.  Under U.S. law, if the scientific data do not back up such a rule, the courts are obligated to overturn the rule.  Both courts granted summary judgment for EPA, meaning that even if all the evidence were interpreted to favor the pesticide manufacturers, they would still lose on the law.  There were no further appeals.

7.  The EPA ban allowed DDT to be used in emergencies, especially if there were an emergency involving malaria or other insect-borne disease; specifically, EPA’s order allowed DDT use against any insect “vector” to fight disease at any time, for indoor residual spraying (IRS) the preferred method of fighting malaria.   The EPA ban did not cover manufacturing, and U.S. DDT manufacturers ran a lively export business through 1984. On the day before the Superfund law took effect in 1984, requiring manufacturers to clean up toxic wastes they had dumped in violation of law, several of the DDT manufacturers declared bankruptcy, leaving the Superfund to clean up DDT sites in Texas and California, and other places.  Clean up continues today, 25 years later, costing tens of millions of dollars a year.

Manufacture of DDT today is chiefly in India and China.  Pollution problems abound near those sites.

8.  DDT use was never banned in Africa, especially for use to fight malaria.  Considering mosquito resistance and immunity, however, Africans generally chose not to use DDT.  DDT’s reputation was further tarnished when it was revealed that broadcast outdoor spraying had killed food fishes in several places, leading to near starvation for local populations.  South Africa used DDT right up through 1996, then stopped.  When mosquitoes with malaria flowed over the border from neighboring nations without adequate disease control programs, malaria rates shot up, and DDT was again used as a last-ditch defense.

9.  Generally, malaria infections and malaria deaths continued to decline in Africa and Asia after Silent Spring, and after the U.S. banned DDT use on crops. Malaria in Africa rose after 1985 when malaria parasites developed immunity to the pharmaceuticals used to treat the disease in humans.  Without an effective drug regimen, death rates rose, too.  DDT could not offer any help in this fight.

10.  One of the greatest barriers to fighting malaria in Africa has been unstable governments.  For example, it is difficult to believe that Idi Amin, the horrible dictator who ruled Uganda from 1971 to 1979,  and claimed to have eaten some of his executed enemies, refused to spray DDT because he wanted to be environmentally friendly.  If Monckton wants to make such a claim explicitly, he’s nuts (he may be nuts anyway, but this unspoken claim of his is particularly insane).   Other nations had less spectacular misrule, but the effect was the same:  When governments could not, or did not mount fights against mosquitoes and malaria, malaria spread.  This had nothing to do with DDT, nor with a lack of DDT.

11.  When WHO suspended their campaign against malaria using large-scale DDT spraying out of doors, malaria killed about two million people annually, down from a peak of nearly four million 15 to 20 years earlier.  Today, malaria kills about 900,000 people annually.  Monckton says the lack of DDT has been responsible for 40 million deaths in the last 40 years.  That’s a good trick, really — it’s a lower rate than others have claimed, but it assumes that every malaria death could have been prevented with DDT, something we know is not the case.  More, it assumes that the U.S. ban on spraying DDT on cotton in Texas in 1972 somehow caused Africans to stop using DDT in 1965, a neat feat of time travel, and an astounding feat of regular travel, Texas being about 10,000 miles from most of Africa, too far for mosquitoes to migrate.

In three sentences, Monckton crammed in 11 grotesque falsehoods.  And that paragraph was not even the topic of the article.  And what is it about these propaganda attacks dead women?  Unholy attacks on Rachel Carson are bad enough — now Monckton goes after Jackie Kennedy, too?  Do these guys carefully choose targets who cannot respond, and who, because dead, cannot sue for libel?

Is it true that a Lie can get halfway around the world before Truth gets its boots on?  Isn’t there some Truth Police who could stop Monckton from spreading that crap?

Oh, and while I’m thinking about it:

Spread the word, stop the madness:

St. Denis’s Day, and a missed chance at humor

Yesterday, October 9, was the Feast Day of St. Denis.

Who?  He’s the patron saint of Paris (and France, by some accounts), and possessed people.   Take a look at this statue, from the “left door” of the Cathedral of Notre Dame  in Paris (Cathédrale Notre-Dame de Paris: portail de gauche).  He was martyred by beheading, in about 250 C.E.

According to the Golden Legend, after his head was chopped off, Denis picked it up and walked two miles, preaching a sermon the entire way.[6] The site where he stopped preaching and actually died was made into a small shrine that developed into the Saint Denis Basilica, which became the burial place for the kings of France. Another account has his corpse being thrown in the Seine, but recovered and buried later that night by his converts.[2]

Clearly, he is the guy to pray to about Michelle Bachmann, Rush Limbaugh, intelligent design, and the Texas State Board of Education, no?  You catch my drift, you can use this factoid to some advantage, enlightenment, and perhaps humor.

Chess games of the rich and famous: Ray Charles and Tony Horowitz

One more indication of the extreme genius of Ray Charles.  How does a blind person play chess?  Very well, it appears.

Tip of the old scrub brush for inspiration to Grandmaster Raymond Keene and Bishop Berkeley. They also call our attention to this photo — on a school bus? 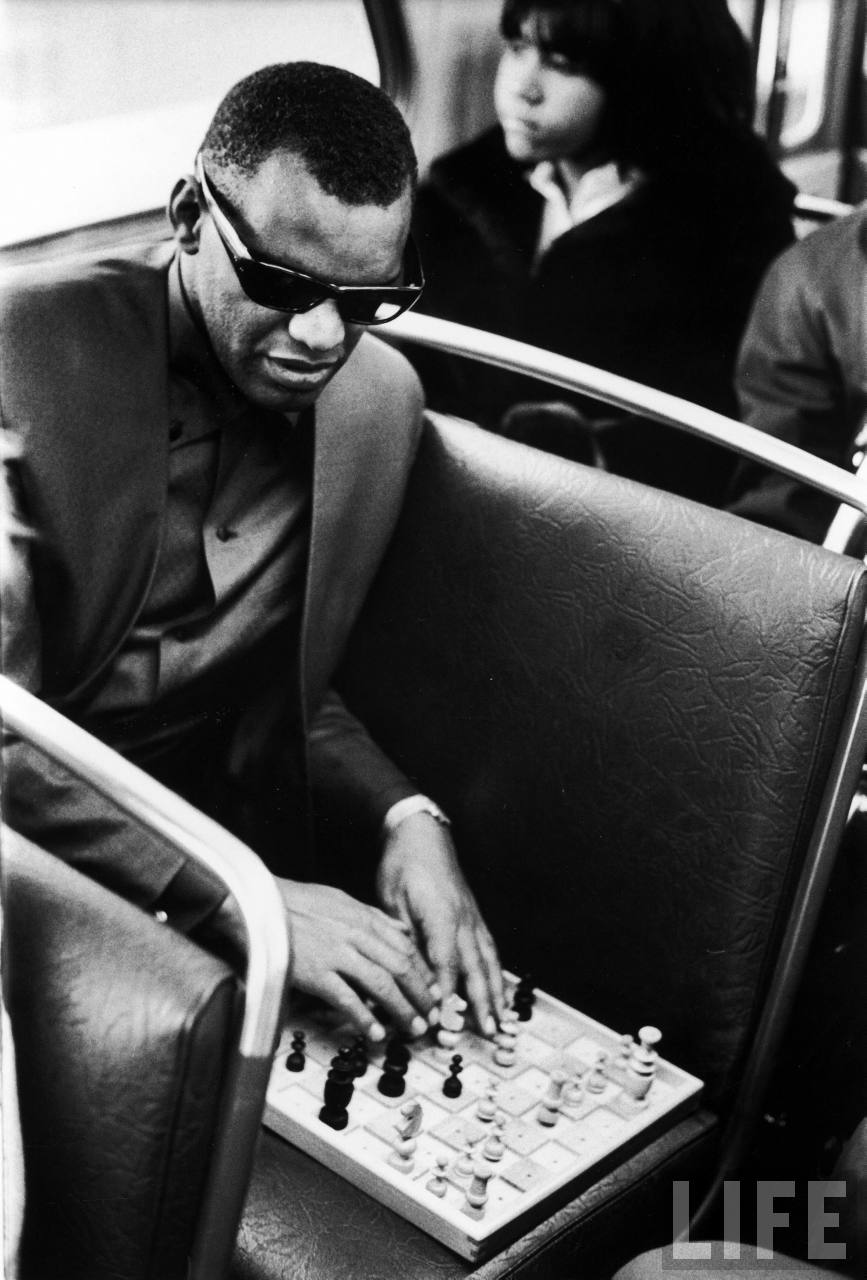