This is news economists and budget watchers and policy makers have been hoping to hear for 60 years.

Here it is — did you see it in your local paper? On TV? On Facebook? 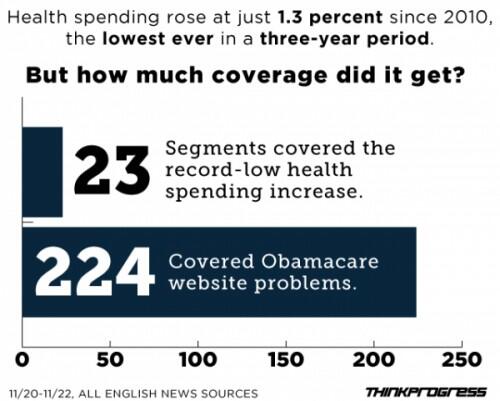 One criticism aimed at the Affordable Care Act that had some legs was that it did not go far enough to control actual costs. Cost controls would have been impossible to add to the bill, politically. So the hope was that this first step would have some impact.

By 2012, with a push from the reforms in the ACA, Bill Clinton reported that health care cost inflation had dropped to 4% per year.

Who covered it?  Not many, according to ThinkProgress.

Bad news gets 24-hour coverage and bulletins during the ads.  Good news is an orphan.  How wrong is that?

Bookmark the chart and ThinkProgress; you’ll need facts in your discussions.

This entry was posted on Tuesday, December 10th, 2013 at 8:54 pm and is filed under Economics, Government, Health care, History. You can follow any responses to this entry through the RSS 2.0 feed. You can leave a response, or trackback from your own site.