Several good developments in the War on Malaria, worldwide — along with some alarming signs.  Maybe there will be time to blog seriously about each of these things later. Let’s get them known, and keep discussion going for the best way to beat malaria in a post-DDT world.

QPharm Tweeted about DSM 265, an experimental, one-dose treatment developed by the Medicines for Malaria Venture (MMV); the video is useful for the background those new to the issue can get on the problems of treating malaria, which make great hurdles for campaigns to eradicate malaria.

In 2013, there was around 584,000 #Malaria related deaths globally. View this video on some amazing work being done https://t.co/mUBleTanJQ

DSM265 is a selective inhibitor of the plasmodial enzyme called DHODH. DHODH is a key enzyme in the replication of the parasite. If we can inhibit that enzyme with DSM265, we can stop the life of the parasite.

Voice of America reported on Rollback Malaria’s call for $100 billion to be spent in the next 15 years, to stamp out the disease.

Malaria deaths are, in 2015, at an “all time low.” Deaths hover around 500,000 per year, most in Africa, and most among children under the age of 5. A staggering total, until compared to the post-World War II estimates of more than 5 million deaths per year, or the more than 3 million deaths per year in 1963, the year the World Health Organization (WHO) had to stop its ambitious campaign to eradicate malaria when pesticide DDT, upon which the campaign was based, produced resistance in mosquitoes in areas where the campaign had not yet reached.

Beating malaria is one of the Millennium Development Goals of the United Nations; this year’s report on MDG acknowledged the great progress already made.

Another non-governmental malaria-fighting organization discussed the news; see the press release from Malaria No More.

Medical News Today Tweeted out a tout for its own coverage of malaria — notable for a good, basic explanation of malaria and how to fight it.  I wish critics of Rachel Carson and WHO were familiar with half of these basic facts. 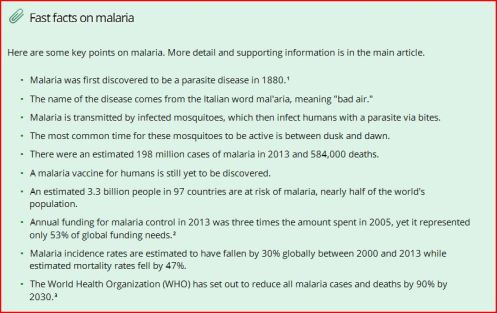 One malaria vaccine has won approval for final testing. Good news, though anyone who follows vaccines knows it will take a while to test, and anyone who knows malaria fighting knows there are four different parasites, and delivery of any medical care is tough in far too many parts of the world where any form of malaria is endemic. Even small good news is good news.

VIDEO: Malaria vaccine close to roll-out: The first ever vaccine for malaria has been approv… http://t.co/2imMYxqpkO #medcomms #pharma

Even with a < 50% efficacy, the new #malaria vaccine will ↓ the disease frequency in kids, say experts http://t.co/AIs1UmgvJl #DefeatMalaria

Why the new #malaria vaccine can be a game changer, imperfections and all. via @FastCoExist http://t.co/b3EZseoYk9

@GSK works on #malaria vaccine for 28 yrs, sell @ cost +5%, invest that $$ in underfunded diseases. #CSR at its best http://t.co/vayXryvIjH

Are we better informed about malaria now? Do we understand spreading a lot more DDT is not the answer?

This entry was posted on Tuesday, August 18th, 2015 at 2:32 pm and is filed under Africa, DDT, Health care, Malaria, Vaccinations. You can follow any responses to this entry through the RSS 2.0 feed. You can leave a response, or trackback from your own site.

One Response to Malaria Twitterstorm, summer of 2015