Recently ran across this photo of Utah’s Mt. Timpanogos in the snow. You can see how majestic the mountain is dressed in white, and how its glory can bring awe and joy to people in the valley.

Photo found on Wikipedia, from January 2008.


Wesley Aston is a Utah-based photographer whose work I’ve admired for some time. He photographs the rocks and skies of Utah, so much of which I trekked as a youth (less, later). One of my great pleasures was to sit on a mountainside, probably long after we should have gone down the trail to safety, to watch thunderstorms push over a mountain range, plunge into a valley and rush toward us, or maybe away from us.

At the time I wished I had photographic equipment that had not really been invented yet in non-governmental circles, to capture those scenes.

Aston does that. He’s got the equipment. He knows how to use it.

This is the kind of work that should be standard fare in geography classes in public schools, but is not.

We can enjoy it here, though.

Wherever it can, life blossoms


Oops. Misattributed, misidentified photo. Turns out this is really from the Atacama Desert in South America. Point still stands, but I got hoaxed on the identification of the photo.

Even just in cracks in the desert clay.

Hmmm. Too far south, too dry an area for me to recognize the species right off the bat. Anyone got suggestions?


I wonder what a similar film of the U.S. would look like? Has anyone done it?

It would probably have to be 400 seconds, at least.

Description of the film from Friends of the Earth:

It’s difficult to get a picture of what the United Kingdom really looks like. Imaginations and assumptions can distort decisions that affect our lives. We often hear the idea that there is simply no more room in the country. In reality, just six per cent of the UK is built on.

‘The UK in 100 Seconds’ is a provocative and thought provoking film that rearranges the United Kingdom’s land into 32 categories and divides them over 100 seconds. Each second equates to 1% of what the country looks like from the air.

Made by guerrilla geographer Daniel Raven-Ellison and filmmaker Jack Smith, the film was made by travelling from Tongue in the north of Scotland to the New Forest in the south of England. Each second of the film covers roughly one metre of Raven-Ellison’s walk through moorland and peat bogs, down a runway and over a dump.

Made in collaboration with Friends of the Earth, the film gives an honest reflection of what land looks like and how it is used in the United Kingdom and raises some challenging questions. A major inspiration for Raven-Ellison making the film is the amount of space that is used for feeding livestock and the question – what if we made more space for nature?

Bureau of Land Management’s (BLM, Department of Interior) great photographer Bob Wick captures a photo that separates the redrock lovers from everybody else.

The road seems to dead end in the mountains ahead. Nobody visible in the land for miles around. It’s either incredibly desolate and lonely, or among the most beautiful, everyday views among rocks of incredible beauty you’ll ever see and remember forever.

Caption from America’s Great Outdoors, Tumblr blog of the U.S. Department of Interior: Heading south from Hanksville, Utah, towards Lake Powell, highway travelers bisect the remote Henry Mountains – the last area mapped in the lower 48. The 11,000-foot forested peaks of the main mountain range rise to the west, while two distinctive summits, Mount’s Ellsworth and Holmes, jut skyward from the rolling red sandstone mesas to the east. Known as the “Little Rockies,” these peaks are studied by geologists around the world as a classic example of igneous rocks, formed deep within the earth’s mantle, thrusting through the overlying sandstone layers. The Little Rockies have been designated as a National Natural Landmark for their geological significance. The peaks also provide habitat for desert bighorn sheep and numerous birds of prey. Photo by Bob Wick, Bureau of Land Management, @mypubliclands

Outdoors people in Utah usually know the Henry Mountains. There’s a buffalo herd there, open to hunting. It’s an amazing rock formation in the middle of other amazing rocks, a towering landmark for miles.

Hanksville would have to be invented by a good fiction writer if it didn’t exist, a desert town where everybody stops who passes by, with nothing really to commend it but the fact that it’s there, and populated by people of great character. Who names a town “Hanksville?”

Images from “Powers of Ten,” 1977 edition. From IconEye

We’ve only got two tens in the date today, but the work of Charles and Ray Eames deserves remembering at least every October 10.

It’s a classic film, wonderful in its earliest versions in the 1970s, long before CGI. In 2018, I think it stands up very well.

AMNH’s “The Known Universe” is a cool film. Putting up that last post on the film, I looked back and noted that when I had previously written about the brilliant predecessor films from Charles and Ray Eames, “Powers of Ten,” the Eames films were not freely available on line.

I like to use films like this as warmups to a year of history, and as a reminder once we get into studying the history of space exploration, of just how far we’ve come in understanding the universe, and how big this place is.

Of course, that means wer are just small parts.

The Eames’s genius showed the scale of things, from a couple picnicking in a park, to the outer reaches of the universe, and then back, zooming into the innermost reaches of a human down to the sub-atomic level.

There’s a series of these films; this one, published on YouTube by the Eames Office, was done in 1977, one of the later versions.

How can you use this in class, teachers? (I recommend buying it on DVD, as I did; better sound and pictures, generally.)

Powers of Ten takes us on an adventure in magnitudes. Starting at a picnic by the lakeside in Chicago, this famous film transports us to the outer edges of the universe. Every ten seconds we view the starting point from ten times farther out until our own galaxy is visible only a s a speck of light among many others. Returning to Earth with breathtaking speed, we move inward- into the hand of the sleeping picnicker- with ten times more magnification every ten seconds. Our journey ends inside a proton of a carbon atom within a DNA molecule in a white blood cell. POWERS OF TEN © 1977 EAMES OFFICE LLC (Available at http://www.eamesoffice.com)

At the Eames Office Youtube site, you may find the film in with Mandarin Chinese, German, and Japanese translations (no Spanish?).  If you’re unfamiliar with the work of this couple — you would recognize much of the stuff they designed, I’m sure — check out a short film on an exhibit on Ray Eames (which has concluded, sadly):

Deer in a lake, Oregon — stunning photo, a fake

Frustratingly, the only information from @BestEarthPix is “Oregon, USA.” It’s a mule deer, in a lake. Which lake? Who was the lucky/skilled photographer? No details.

Can you supply details? The photographer should get credit, I think. 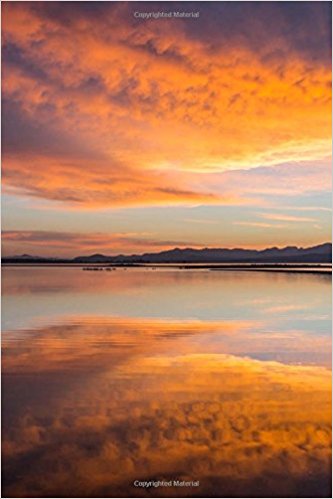 From “Sunrise at Yellowstone Lake Journal,” available from Amazon.com/UK

How disappointing, and maddening, that what looks like a great image turns out to be faked.