Got questions about ObamaCare? Check out this site

I get e-mail; this one may prove useful to more than a few people, especially anyone who owns a small business and has questions about how ObamaCare — the Affordable Care Act — will affect your taxes, your hiring, your expenses, etc.:

In fewer than 100 days, the new health care reform law takes an important step forward. On October 1, 2013, Health Insurance Marketplaces will open in every state, and millions of Americans will be eligible to apply for coverage. Between now and then, we’re sure that lots of people will be looking for information about the upcoming changes.

That’s why we revamped HealthCare.gov.

On the updated site, you’ll be able to get a personalized list of coverage options, tailored to your situation, and a checklist to help prepare for October 1. You’ll find a rich set of answers to frequently asked questions, powerful search features to help you find the specific information you need, and two great ways to talk to customer service representatives, 24/7: a new 1-800 number (1-800-318-2596) and online chat.

When open enrollment starts on October 1, 2013, you’ll be able to use the site to compare various health care plans side by side to find a plan that fits your life and your budget. You’ll even be able to use HealthCare.gov to apply for coverage or be directed to your own state’s application portal.

We hope you’ll use the site to get answers to your questions about the health care law — and forward this email to your friends so they can do the same.

P.S. — Have questions about what else you can expect from health care reform? Click here for a timeline of the key features of the Affordable Care Act.

[My e-mail address cut out ]

Several people I’ve run into have questions about the program — some of the questions are serious, and difficult for me to answer, and some are silly (“Why do I have to give up my insurance now?” Answer:  You don’t.)  There’s a great need for answers.  Distortions of the plan from the nasty political fights involved, have taken hold in the mind of many as representations of what the plan weill do.

Go try the site.  Does it answer your questions?  What questions do you have that are not answered by this site? 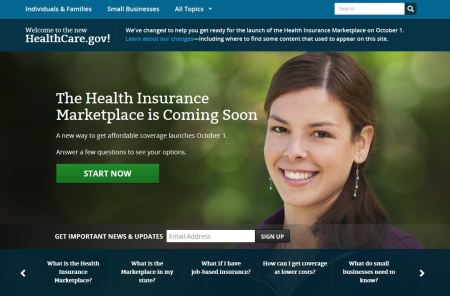 A guy named William Duncan at a blog called Sensible Thoughts posted something I found inherently unsensible a while back.  He listed six reasons why he thought the Affordable Care Act should be repealed. (“A while?” “Yeah, July 2012 is ‘a while.'”)

His sixth point was the old canard about Congress and the President being exempt.  Of course they are not exempt, and so I told him.

Your sixth reason is in error. There is no provision to exempt either the president or Congress from the act. There is no language in the bill such as you describe. Language from page 114 can be found here:

At some length, Mr. Duncan removed that point, but said he still thinks the law should be repealed on the other five points I hadn’t dealt with.

Ed:
Thank you for the correction on point #6. I have gone back and looked at this, and you are absolutely right. Although the Wall Street Journal and folks like Sean Hannity reported that the President and members of Congress are exempt from participation in the Affordable Care Act, in the end that did NOT make it into the language of the legislation. I have deleted point #6 from the post as a result. Thank you for the correction. Now, if you copuld only prove me wrong on the rest of the points listed…. Unfortunately, this remains a bill the the American public did not want, and was purchased by shenanigans that the Administration should be ashamed of.

A quick and dirty response; we may need to put more meat on these response bones in the next couple of months, because the opposition to ObamaCare relies on severely distorted claims about the law and what it actually does.  Much if not most of the good stuff in the law is completely ignored by these critics, and we should point that out, too.

What makes you think Americans didn’t want it? There was a whale of an anti-health care campaign after the act passed, but when it passed, it enjoyed a majority of support. And, when we take each provision of the bill and ask people about that provision, they approve overwhelmingly.

For example, not even you are opposed to continuing the Reagan-era program that encourages medical schools to train more general practitioners. No one seriously objects to the provisions that pay physicians to practice in under-served areas, like West Texas, Iowa, and West Virginia. No one objects to the provisions that train more nurses. Only the most rabid racists complain about continuing and expanding the health care clinics on Indian reservations.

The law has dozens of provisions like those, and no one in their right mind objects to them.

Your other five points?

I am concerned that you don’t appear much familiar with what the bill actually does. Here are a few reasons to keep the law.

I cannot imagine why anyone would want to go back to 20% annual health care cost inflation, the highest per capita health care costs in the world by a factor of two, while leaving one out of every seven people uninsured even though we were paying amounts more than the insurance would have cost.

Obamacare reduces the deficits, and puts our health system on the path to catch up to the rest of the industrialized world, with better care for less cost.

I’ll keep it, thank you.

(See this, too: “More good news about Obamacare: CBO says it will save money”

Romney/Ryan: U.S. can’t afford to be great any more

Someone with a handle LLORT3 maybe put it concisely:  “We need healthcare, not wealthcare.”

The lines for the election seem to me to very well drawn:  Back to the Gilded Age, or on to the 21st century.

What do you think?  Did Romney just double down on a Marie Antoinette economy?  Will more than 20% of Americans vote to screw the middle class like that?

Fact vs. Fiction on the Affordable Care Act (Sen. Leahy)

From the good offices of Vermont’s Sen. Pat Leahy (a few links added):

It is disappointing that inaccurate and purposely misleading information regarding health care reform continues to be widely circulated. Throughout the past two years during the lengthy debate on Health Care Reform, Senator Leahy has continued to post updated information regarding the various health care legislative proposals being debated, including the full text of proposals, questions asked by directly by Vermonters, and daily updates on floor proceedings in the Senate in an effort to provide Vermonters with accurate and timely information on the health care reform debate.

Below are some of the most common myths regarding the Affordable Care Act with accurate information dispelling those myths and providing information about where to learn more.

To review some of the most commonly questions by Vermonters please also visit the Frequently Asked Questions page on this website.

To test your knowledge about what is actually included in the health care reform law visit the Kaiser Family Foundation website and take their Affordable Care Act quiz.

Here’s a preview of another piece of television that many Republicans hope you will not bother to see, a piece that explains exactly how and why the health care reforms championed by President Obama will help you and millions of others:

Journalist T.R. Reid examines communities in America where top-notch medical care is available at reasonable costs and, in some instances, can be accessed by almost all residents. Included: Mesa County, Colo.; Seattle; Everest, Wash.; Hanover, N.H. In Mesa County, for instance, doctors, hospitals and insurers place an emphasis on prevention; and a program that offers pre-natal care to poor women has proved popular.

T. R. Reid’s report started airing on PBS stations in mid-February.  If you haven’t seen it, go to this site to view the entire production.

I get e-mail from Nancy Pelosi from time to time, like tonight:

It is my great pleasure to report that tonight, thanks to you, Democrat Kathy Hochul has won a triumphant grassroots victory in the special election in NY-26.

Victories like this are what happen when we fight together to protect our core Democratic values.

Congresswoman-elect Hochul’s victory in a staunchly-Republican district has shocked the political world and sent an unmistakable sign that the American people will not stand for the Republicans’ reckless and extreme agenda to end Medicare.

This is our third straight special election victory in New York — and it is truly one for the ages. All of the Republicans’ right-wing outside groups with their secret money and dishonest attacks were no match for the combined strength of grassroots Democrats.

Thank you again for fighting to protect and defend Medicare and bringing us one step closer to regaining our Democratic House Majority.

Is there a lesson in the election?  Yes, there is:  Republicans overreached when they started their march against Medicare.

See the story in the New York Times:

Two months ago, the Democrat, Kathy Hochul, was considered an all-but-certain loser in the race against the Republican, Jane Corwin. But Ms. Hochul seized on the Republican’s embrace of the proposal from Representative Paul D. Ryan, Republican of Wisconsin, to overhaul Medicare, and she never let up.

On Tuesday, she captured 48 percent of the vote, to Ms. Corwin’s 42 percent, according to unofficial results. A Tea Party candidate, Jack Davis, had 8 percent.

Voters, who turned out in strikingly large numbers for a special election, said they trusted Ms. Hochul, the county clerk of Erie County, to protect Medicare.

Kathy Hochul claimed victory at an election party in Amherst, New York, on Tuesday night. Hochul won a seat in Congress in what has traditionally been a Republican district in New York. New York Times photo by Michael Appleton