In January 2020, the U.S. Flag Code urges citizens to fly flags on these dates, listed chronologically:

A “living flag” composed of 10,000 sailors, or “Blue Jackets at Salute,” by the Mayhart Studios, December 1917; image probably at the Great Lakes training facility of the Navy. Gawker media image

November offers several flag flying days, especially in years when there is an election.

But December may be the month with the most flag-flying dates, when we include statehood days.

December 7 is Pearl Harbor Remembrance Day.  It’s not in the Flag Code, but public law (P.L. 103-308) urges that the president should issue a proclamation asking Americans to fly flags.

December 25 is Christmas Day, a federal holiday, and one of the score of dates designated in the Flag Code. If you watch your neighborhood closely, you’ll note even some of the most ardent flag wavers miss posting the colors on this day, as they do on Thanksgiving and New Years.

Nine states attained statehood in December, so people in those states should fly their flags (and you may join them).  Included in this group is Delaware, traditionally the “First State,” as it was the first colony to ratify the U.S. Constitution:

December 15 is Bill of Rights Day, marking the day in 1791 when the Bill of Rights was declared ratified; but though this event generally gets a presidential proclamation, there is no law or executive action that requires flags to fly on that date, for that occasion.

Eleven flag-flying dates in December.  Does any other month have as many flag flying opportunities?

Have I missed any December flag-flying dates?  11 events on 10 days (Delaware’s statehood falls on the anniversary of the Pearl Harbor attack).

Here’s a list of the days to fly the flag, under national law, in chronological order:

Fly your flag with respect to the flag, for the republic it represents, and for all those who sacrificed that it may wave on your residence.

Appropriate to a snowy December. “The Barn on Grayson-New Hope Road. This barn with its old truck and ever-present American flag, is often the subject of photographs and paintings by the locals.” Photo and copyright by Melinda Anderson


August in the U.S. is a lazy, often hot, summer month. It’s a month for vacation, picnicking, local baseball games, camping, cookouts and beach vacations. It’s not a big month for events to fly the U.S. flag.

Only one event calls for nation-wide flag-flying in August, National Aviation Day on August 19. This event is not specified in the Flag Code, but in a separate provision in the same chapter U.S. Code. Will the president issue a proclamation to fly the flag for National Aviation Day?

Put these dates on your calendar to fly the flag in August:

If Texans want to fly their flags for the children’s returning to school on August 18, no one will complain. The Flag Code says all public schools should be flying the U.S. flag every school day — check to be sure your child’s schools do that.

You may fly your U.S. flag any day. These are just the days suggested in law.

Schooner on Chesapeake Bay flies the 15-stripe/15-star flag that flew over Fort McHenry. Image from the Maryland Secretary of State’s Office

Is April the cruelest month?

It’s cruel to people who want to fly U.S. flags often, but only on designated flag-flying dates. (April is also National Poetry Month, so it’s a good time to look up poetry references we should have committed to heart).

For 2019, these are the three dates for flying the U.S. flag; Easter is a national date, the other two are dates suggested for residents of the states involved.

One date, nationally, to fly the flag. That beats March, which has none (in a year with Easter in April and not March). But March has five statehood days, to April’s two.

Take heart! You may fly your U.S. flag any day you choose, or everyday as many people do in Texas (though, too many do not retire their flags every evening . . .).

Three dates to fly Old Glory in April, by the Flag Code and other laws on memorials and commemorations.

April usually sees the opening of Major League Baseball’s season — some teams jumped into March in 2018. In this photo, U.S. Navy sailors assigned to the USS Bonhomme Richard practice for the San Diego Padres’ opening day flag ceremony in San Diego on April 5, 2011. The ship sent nearly 300 volunteers to unfurl an 800-pound U.S. flag that covered the entire field. The Bonhomme Richard was in dry-dock for maintenance and upgrades. Defense Department photo via Wikimedia.


Maine joined the union on March 15, 1820, the 23rd state. It was created out of what had been lands of the colony of Massachusetts.

Maine gave us a Vice President, Hannibal Hamlin, under Abraham Lincoln. In Hamlin’s term he disappeared from Washington, D.C. At some length, a story goes, Hamlin was tracked back to Maine where he had enlisted in the Civil War effort, cooking for the troops.

James G. Blaine, a newspaper editor, got the Republican nomination for the presidency in 1884. He lost the election to Grover Cleveland, but gave us that memorable phrase from the college U.S. history survey courses: “Blaine, Blaine, James G. Blaine! The Son of a Bitch from the State of Maine.”

Blaine was no slouch. He served 13 years in the U.S. House of Representatives, rising to the position of Speaker, served a term in the U.S. Senate and was twice U.S. Secretary of State, under three different presidents.

Despite its many natural wonders, Maine is one of four U.S. states I have not visited. (Where’s the invitation, Greg Marley?)

Maine has a lot of people flying U.S. colors, judging from photographs. Good on them all. I wonder whether Mainers celebrate statehood, or just let it pass? 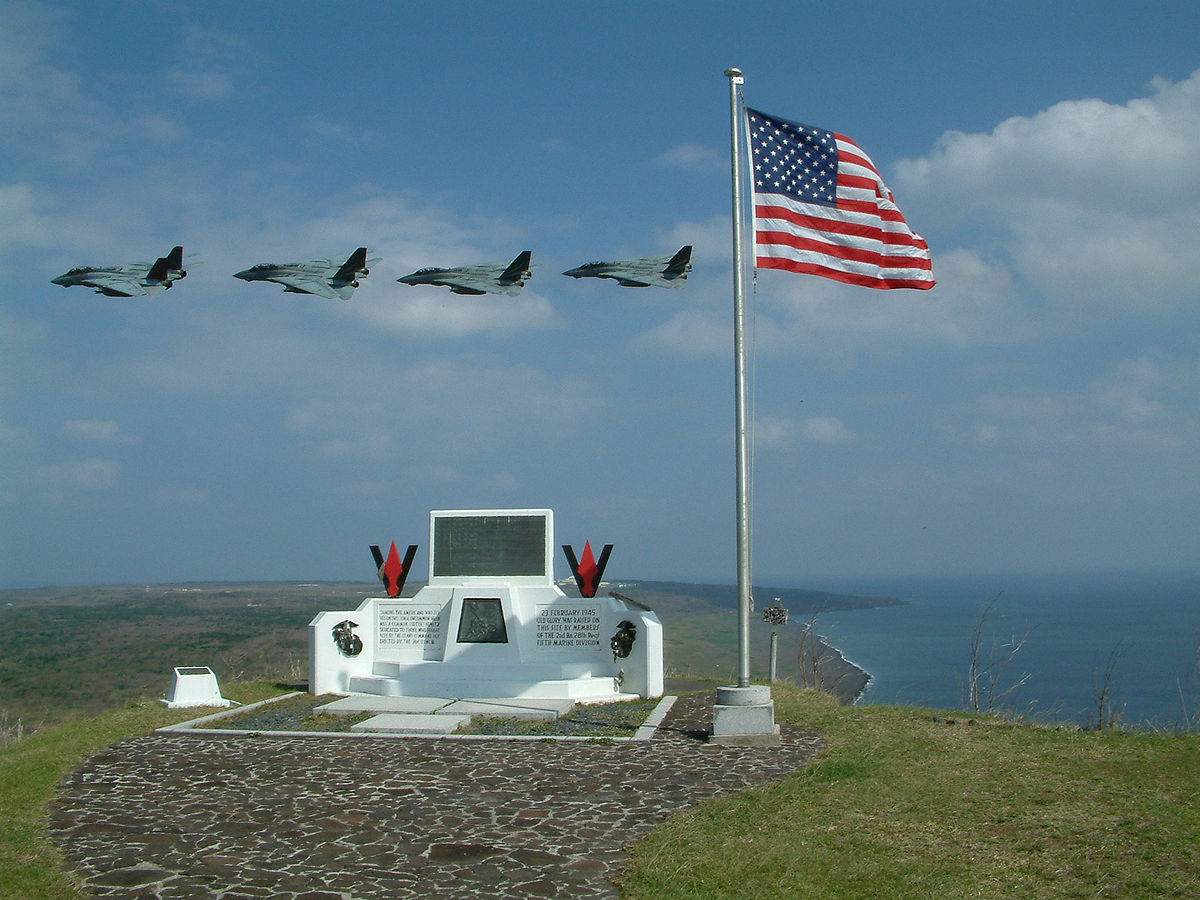 You want to mark your calendar so you remember to put your U.S. flag up on those dates designated by law and tradition, right?

Which dates in February? Here at the Bathtub, we’re running behind on the news — we’ve missed marking Massachusetts statehood.

You may fly your flag on state holidays, too — which of those dates do we see in February?  Is there a good list?

Though we don’t mark it usually, February 14 is the anniversary of the first recognition of the Stars and Stripes by a foreign government, in 1778.  The French fleet recognized the ensign carried by Capt. John Paul Jones, at Quiberon Bay — painting of the event is at the top of this post.

February 23 is the anniversary of the raising of the U.S. flag on Iwo Jima, in 1945 — 74 years ago.  We should probably watch for proclamations to fly the flag on that date, an anniversary made more important simply because so few survivors from among the veterans of that war and that fight can be expected to live to see the 80th anniversary. Regardless any official, formal proclamation to fly the flag for the Iwo Jima events, you may always fly your flag.

Please visit earlier posts at Millard Fillmore’s Bathtub, on the death of Joe Rosenthal, the photographer who took the widely-released iconic photo; on the death of Charles Lindberg, pictured in the first flag-raising on Mt. Suribachi; on the death of Raymond Jacobs, the last-surviving veteran from the flag raisings; and on my visit to the Sunset Parade at the Iwo Jima-themed U.S. Marine Memorial overlooking Washington, D.C.

A Youtube poster edited a part of the Army’s documentary, “To the Shores of Iwo Jima,” showing the flag raising on film, and added in some other images for a less-than-three-minute look. (Alas, that edited version is gone — here’s the full 20-minute movie; propaganda at its best, for noble purposes.)

Caption from the U.S. Navy, via Wikipedia: Photo #: 80-G-K-21225 (color) “First Recognition of the American Flag by a Foreign Government,” 14 February 1778. Painting in oils by Edward Moran, 1898. It depicts the Continental Navy Ship Ranger, commanded by Captain John Paul Jones, receiving the salute of the French fleet at Quiberon Bay, France, 14 February 1778. Earlier in the month, after receipt of news of the victory at Saratoga, France recognized the independence of the American colonies and signed a treaty of alliance with them. The original painting is in the U.S. Naval Academy Museum, Annapolis, Maryland. Official U.S. Navy Photograph, now in the collections of the National Archives. [A larger version is available for download at Wikipedia.]

December 3 is the anniversary of the day Illnois was admitted to the union in 1818, the 21st state.

Under the U.S. flag Code, Americans should fly their U.S. flags on the statehood day of their state.

You flying ’em, Illinois?  If you’re in this area, you should be!

A U.S. flag flies in the Gold Coast neighborhood of Chicago, some time between 1980 and 2006. Part of Carol Highsmith’s collection of American photographs at the Library of Congress.

At the American Memory site at the Library of Congress, we get a good, brief dose of the events leading to statehood.

Next date for flying U.S. flags is a two-fer, December 7, for Pearl Harbor Remembrance Day, and for Delaware’s statehood. Delaware was the first colony to ratify the Constitution on that December day in 1787.