How about another cup of coffee? (Global Warming Conspiracy and Starbucks Cup #289)

Encore post from September 17, 2007, and August 2009 — maybe more appropriate today than ever before.

Found this on my coffee cup today (links added here):

a secret ploy by wacko tree-

independent, clean our air and

of our vehicles, kick-start

our cities safer and more livable.

Don’t let them get away with it! Look! Someone found the same cup I found!

I miss those old Starbucks cups — but then, they killed the Starbucks in our town.  I don’t buy the 100 cups of Starbucks coffee I used to get in a year.

Marxism from Republicans? Sad, but true . . .

The U.S. House of Representatives scheduled a vote today to force light bulb manufacturers to keep manufacturing bulbs the market has rejected — Marxist socialism at its apex! — in order to overturn energy conservation standards signed into law by President George W. Bush in 2007.

Lately it seems that the House Republican leadership is against everything that isn’t pre-approved by Big Oil or the Tea Party. Perhaps the most outlandish example of this Groucho Marx approach to public policy is today’s vote on the BULB Act, H.R. 2417. It would repeal the energy efficiency standards for light bulbs established in the Energy Independence and Security Act of 2007, or EISA, P.L. 110-140. It would also prevent California from setting its own light bulb efficiency standards. The original author of the provision is House Energy and Commerce Committee Chair Fred Upton (R-MI), who is now supporting the repeal of his own idea after conservatives attacked it along with other clean energy programs.

EISA, with Rep. Upton’s efficiency measure, passed the House in 2007 by a bipartisan vote of 319-100, with support from 49.7 percent of Republicans who voted and 98 percent of Democratic votes. President George W. Bush signed it into law.

Meanwhile, PopVox has a poll on the bill.  Go on over there and vote “no,” meaning you wish to keep the conservation standards.

Tip of the old scrub brush to ThinkProgress via Jennsmom.

NOAA's Mauna Loa Observatory, from NOAA At the Ends of the Earth Collection, 1982 NOAA photo by Commander John Bortniak

Here are the facts on atmospheric carbon dioxide (CO2):

As described at the Scripps Institution of Oceanography site:

Description:
Monthly average atmospheric carbon dioxide concentration versus time at Mauna Loa Observatory, Hawaii (20°N, 156°W) where CO2 concentration is in parts per million in the mole fraction (p.p.m.). The curve is a fit to the data based on a stiff spline plus a 4 harmonic fit to the seasonal cycle with a linear gain factor.

For perspective, here’s a chart from Scripps that shows why there is concern over current levels of CO2:

CO2 over the past 420,000 years - Scripps Institution of Oceanography

Earlier we discussed the political jabs lacking scientific merit at the blogs that have sprung up to harry and heckle climate scientists, especially a relatively new one called, inaptly, “haunting the library.”

The author and commenters have taken to calling Dr. James Hansen “Beijing Jim,” thinking it a cleverly insulting nickname.

They started it when Hansen wrote an opposite-editorial page piece for the South China Post, urging China to act against global warming anyway, despite the U.S.’s failure to take aggressive-enough action yet.

haunting the library tries to spin the piece as Hansen moving over to China’s side in all issues, a position they seem to think is somehow unpatriotic (and therefore, insulting to Hansen).

Actually, in the article, Hansen doesn’t let China off the hook at all.  It’s a patient, well-aimed call to China to do the right things.  Only by misreporting and misrepresenting what Hansen said can climate science cranks spin it.

James Hansen takes the honorable high road, calling on the world’s most-polluting nations to take action now to save our children’s and grandchildren’s future.  haunting the library issues schoolyard, childish and churlish taunts.

Oh, but Dear Reader, you’re already guessing at the particular intellectual clumsiness I’m getting to, aren’t you?  It’s about that taunting name, “Beijing Jim.”  It’s unfair and undeserved because Hansen represented America well, and honorably.  “Free Enterprise Jim” would be closer to the facts.

January 24, 2011:  Others are watching, too.  Tim Lambert at Deltoid makes gentle correction of an Andrew Bolt column relying on misinformation from hauntingthelibrary.  Good discussion there.

Lens incompetence: Watts Up looks through the wrong end of the telescope

The wags and denialists over at Anthony Watts’ joint are up to their old tricks, accusing others of their own errors.  Today it’s a guest post by Bernie Lewin, in which he claims that climate warming was all psychological, a “scare”:

Yet we can find precedents to this science-base scare in many health scares of recent decades, and also in environmental scares since the DDT cancer scare triggered by Silent Spring, politicised by the EDF and legalized by the newly formed EPA. (See Scared to Death which finds a repeating pattern to these science-based scares.) 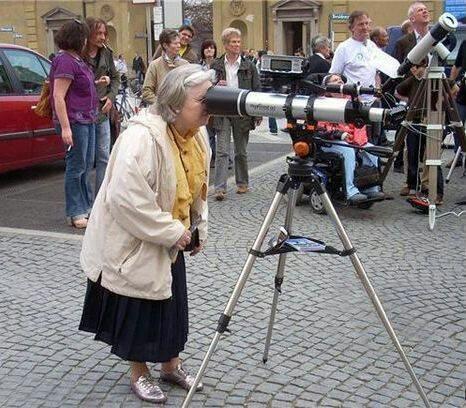 This woman might be corrected; global warming denialists will staunchly insist she knows what she’s doing and doesn’t need YOUR advice.

He fails to even think that Rachel Carson was right.  Lewin demonstrates incompetence at history, law and science, and the first point of the Scout Law, all in one sentence.

So much error.  So little time to correct.

So, in Lewin’s guest post, we see the pattern that continues at Watts’s place — unfair and wrong indictments of science, ignorance of history, little understanding of law.

All while trying to mock scientists:  ‘Of course scientists are almost always wrong,’ Watts’s blog argues, once again.

Watts won’t let me correct his errors there, even though he’s still coddling those who misdescribe Rachel Carson as a mass murderer, while denying he does it himself.  Consequently his readers won’t be alerted to this post because Watts or his minions will edit out the automatic ping his blog gets that this post is here.  Propaganda promoting falsehood can’t stand the sunlight of fact and truth.

Just because there’s a scare doesn’t mean there’s not a reason to be scared.  DDT is a deadly toxin, so long-lived that it almost cannot ever be eradicated from the environment.  It kills everything small, quickly, unless so much of it is used that the small things evolve quickly to be resistant and immune to it.

So, if we are to assume, as Lewin wrote, that the anti-warming bunch is to warming what the campaign against Rachel Carson by the DDT manufacturers was to DDT’s harms, we get a hint of what’s really up at Watts Up:  Any anti-warming claim is a hoax.  Why put it so cryptically, if that’s what they meant to say?

When Lewin looks at the history of DDT and Rachel Carson, he’s looking at the false history, and he draws the wrong conclusions.  Should we trust a guy so sloppy with the facts to be right on anything else?

Another blog, shocked — shocked! — at cold in Argentina in July

Unlike the blog discussed in an earlier post at first, this blog seems to understand that it’s winter in South America.  Still, the author can’t understand why record cold in one small spot doesn’t completely negate warming in the rest of the world:  Minnesotans for Global Warming.

One almost expects to find it has sister sites:  Minnesotans Love Cancer, Minnesotans for Child Abuse, and Self-Lobotomies R Us.

Maybe it’s not the concept of climate that confuses these people, but the entire notion of “average global temperature.”  People who spend their entire lives below average, probably expect that’s the way it is in temperatures, too.  (Is that nasty enough for today?  I’m feeling crabby about idiocy.)

Were you writing fiction, you couldn’t make this stuff up.

Another bastion of people misled by the lack of a Hemingway-brand Solid Gold Sh*t Detector™.

Another person proud as heck of her denial of global warming, points to cattle freezing in South America in July as proof that the Earth’s atmosphere is not warming.

Gee, how to break this news to her?

Cold in winter.  They don’t expect it.  These warming denialists provide the evidence those crabs need, who wonder whether there shouldn’t be some sort of “common sense test” required to pass before allowing people to vote, or drive, or have children.

Oh, it gets worse:

Another site picked up the post.  No, seriously.  (Has Anthony Watts seen this yet?)